A Short Note on Silk

We will update the column of the authentic Japanese silk here.

Daruma has been favored since long ago throughout the whole country. It has been common for silk-raising farmers to have Daruma and decorate it at their home, where they raise silk warms. Why have they been doing it?

Daruma of deep crimson, with a wish for development of silk-raising industry

Traditionally, Japanese cherish a something intimated and believed to bring good luck and take it into their everyday lives, wishing for better fortune. Daruma is one of those, has been said to bring good fortune. The features of Daruma, like materials or colors, are different in each area, there are unique Daruma in all over Japan. Daruma has a structure once it is leaned but return to an original position by itself. For this structure, people regards it as an indomitable spirit with well-known proverb: “Although one falls down for seven times, they will wake up for eight times (=always rising up after repeated failures).” Therefore, Daruma has been a symbol of a pray for victory or a pray for pass exam.
Moreover, since this Daruma’s gimmik of waking up looks after the biological feature of silk warms which wake vigorously after their sleep, Daruma has been enshrined as a guardian for the silk-raising prosperity. Daruma also has a practical function to protect silk-raising. Before chemical dye was found, Daruma had been painted by natural dye from flowers called “Beni-bana”. For that Beni-bana has antibacterial effect, Daruma also had a role for preventing silk-warms’ deceases. 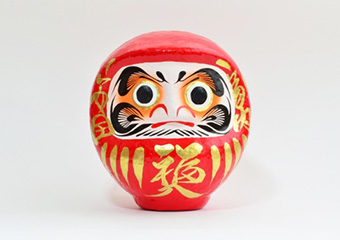 In this way farmers have been raising silk-warm at their home, which has been enshrined with Daruma, wishing an abundant harvest of silk cocoons. However, the number of silk-raising farmers has been drastically fallen now and domestic produced silk cocoons and yarn threads are feared to be extinct. For sounding alarm this situation, we have been holding the exhibitions series of genuinely domestic silk products, called “Takaraginu exhibition”. These exhibitions are aiming to preserve domestic silk products, as being proud of a country of Kimono.
We will hold “Takaraginu exhibition” at Kawasaki Daishi Heiken-ji Temple in October 2016. This temple is famous for protecting prayers against evils and also well known for its Daruma market. At the approach to the temple, shops are lining with different sized and featured Daruma. We are looking forward to all visiting our “domestic silk products festival”. Walking through this approach, you will be reminded of the time when silk-raising industry was flourished.